You can't be serious all the time

There's no general thread or questions of importance on this page. It's just a collection of stuff that has appeared here, there and everywhere, and been spotted by people with sharper eyes than most of us. If Goldie had a teccie bone in her body she'd make it possible for anyone to contribute. Maybe posting stuff on the comment thread will do it...credit will be always be given when the source is known. Work is tough enough, so let's smile 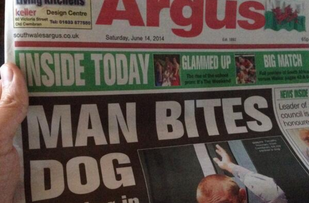 The "definitive" answer to the question "What is news?" makes the splash in the South Wales Argus, thanks to a court hearing in which a man was convicted of assaulting his partner and biting her boxer's face.
Argus editor Kevin Ward tweeted that he had waited 30 years to write the heading.
Adrian Masters of ITV Wales also tweeted, and now it's everywhere.
But, as this spoilsporty blogger points out, it's not that unusual 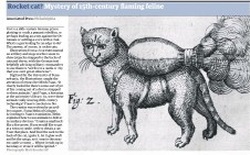 It may be Crufts weekend, but cats rule on this site. Thanks to the Times and the Guardian for brightening our Friday with the story of the 16th century artillery master Franz Helm and his secret weapons of mass destruction. His advice to those who wished to storm an enemy castle to "obtain a cat from that place and bind to its back a small sack like a fire arrow". When the sack is glowing well, the cat should  be released. It will naturally run to what it perceives to be the safest place. Home. Once back in the castle, Helm expects the cat to seek out a quiet spot, probably in the barn. There it will lie down in the hay or straw, which will ignite and...boom!
It's cruelty to the most noble creature and it's history, not news. But, by golly, it sets you up for the weekend. 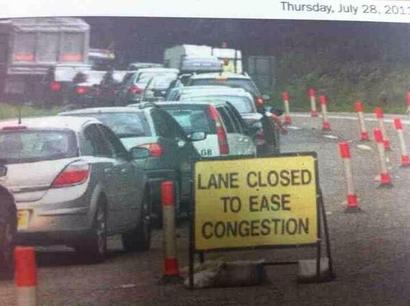