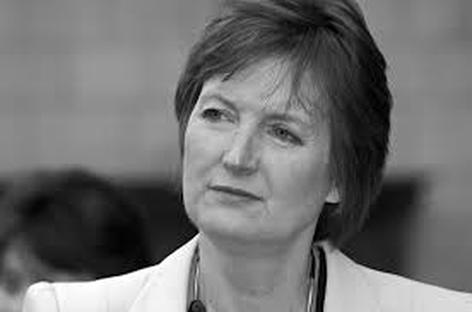 No matter how old a story is, it is still news if it has never been told before.
Retelling an old story, however new it is to the author, is not news.
Repeatedly retelling an old story at 'decent' intervals is not only not news, it is in danger of being propaganda.

This morning the Daily Mail splashed on a story headlined
The truth about Labour apologists for paedophilia
The strapline above referred to the police investigating a 'child sex group in the wake of Savile'.

The crux of the story was that Harriet Harman, her husband Jack Dromey and Patricia Hewitt had all worked for the National Council for Civil Liberties (now Liberty) in the 1970s at a time when the Paedophile Information Exchange was an affiliate organisation. Hewitt was NCCL general secretary from 1974 until 1983 and Harman its legal officer from 1978 until 1982.
All of this has been in the public domain for 40 years.

Today the Mail devotes the front and two and a half inside pages to retelling this story:

The full extent of the shocking links between three senior Labour figures and a vile group that tried to legalise sex with children can be exposed today.
The trio held key roles in a human rights organisation that supported the notorious Paedophile Information Exchange....
Astonishingly this leftwing group granted affiliate status to PIE  and built close links with it. The group of predatory paedophiles was calling for the age of consent to be reduced to just four...

The splash goes on to say that the police are now investigating PIE as part of Operation Fernbridge, which was set up after the Jimmy Savile scandal, and that the Home Office was also looking into 'shocking claims that the Labour governments of the 1970s may have helped to finance the paedophile group'.

If you search Google for the story, the chances are you'll end up on this page of the Mail's website 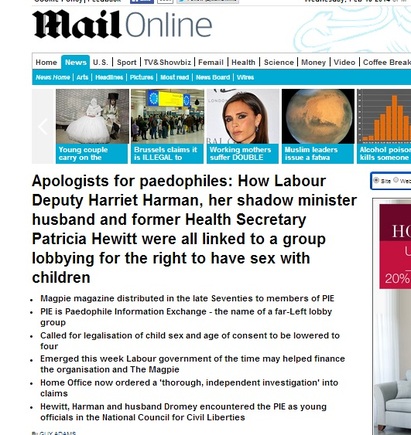 This is not, however, today's story. This was posted at midnight on December 13 and updated a week later.  It wasn't the splash on that occasion - the paper was preoccupied with the Domestic Goddess - but it did make the front page picture. The same picture, indeed that illustrates the story today.
fact that it was outlawed infringed his human rights. He also criticised newspapers for their attitude, saying they should no more characterise paedophiles as 'molesters' than they should describe gays as 'pansies'.
The second document is a piece of PIE literature claiming that sexual relationships between adults and children tended to be beneficial to the child.

No one would today argue in favour of such views - nor did the organisation find much public sympathy at the time. The NCCL excluded it soon after publication of that quarterly magazine at the end of 1982, its leading lights were put on trial, convicted and sentenced for child abuse, and it closed down (or went underground) in 1984.

Back to what is news. Telling people something they didn't know. All of this happened more than 30 years ago, so there will be plenty who are unaware of PIE, let alone its links with the NCCL or the roles the Labour trio played in that organisation. But that is not of itself enough to describe this as news. If it were, papers could trawl through the history books and tell us the details of the Battle of Trafalgar. Nor is it even news to the Mail. Melanie Phillips was writing on this subject in 2012, and before that the Telegraph was raking over the coals back in 2009.

What might make it news would be the establishment of a firm link between the Elm Guest House abuse and PIE - as alleged by the Tory MP Geoffrey Dickens in the early 1980s -  which is presumably what the police are now trying to do.

Dickens started stirring the pot by asking why  the former spy and diplomat Sir Peter Hayman had not been prosecuted along with PIE members with whom he had exchanged obscene material. The decision was made by the then DPP Sir Thomas Hetherington and endorsed in the Commons by the Attorney General Michael Havers. Subsequent Freedom of Information requests for the reasoning behind the decision proved fruitless as the documents relating to the case were destroyed in 2006.

This is also, of course, history, not news. But it also classes as background, and SubScribe is a great advocate of background, of putting material into context. Hayman has not as yet featured in the Mail's coverage of PIE. Nor has it yet mentioned that the revived investigations into what went on at the Elm Guest House have come about not simply as a Savile fallout, but because of the persistence of that scourge of the Press, the Labour MP Tom Watson.

Isn't it a little strange that a newspaper so implacably opposed to the stream of celebrity prosecutions that have arisen from that other Savile offshoot Operation Yewtree should be so interested in Operation Fernbridge?

And is it not slightly odd that, instead of trying to chase down the high-powered child-abusing visitors to the Elm Guest house, it should choose to pursue three people who as twentysomethings thought they were doing the right thing in promoting free speech for all?

If we didn't know better, it might be interpreted as a witch-hunt.