Children in Need, the Philippines typhoon
- and the pensioner Prince 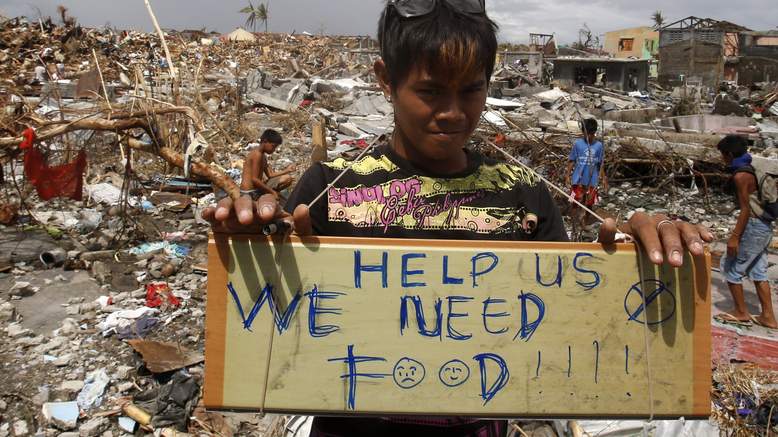 We get the Press we deserve. Celebrity gossip sells papers. If people don't like what newspapers print, they won't buy. Discuss.

We can talk about phone hacking, Leveson, Press freedom. The dumbing down of society. Page 3. Leakers and whistleblowers. National security. Oh, there are all sorts of lines to take for and against British newspapers, their politics, the stories they publish and the way they get them.

Over the past couple of years, journalists have got used to life on the back foot, defending the industry and its role in protecting the public interest. Well SubScribe is taking the night off from that tonight. Because I'm sick of papers that print nonsense day after day, I'm tired of papers that smear and bully just because they can, and I'm fed up with papers whose key selling point is greed. 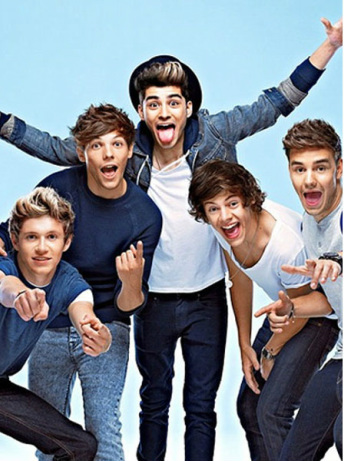 One Direction: turning out for Pudsey
In an hour or so,  JLS, One Direction (right), McBusted, Torvill & Dean, Catherine Tate and the casts of soap operas and West End shows will stand alongside Terry Wogan and Fearne Cotton and urge people to open their wallets. And even after five years of recession and austerity, Britain will respond and cough up something over £25m to help the country's children in need. (Saturday morning update: £31m.)

This time last week typhoon Haiyan struck the Philippines, affecting about 11 million people. At the latest count some 5,000 are dead or missing, more than 12,000 have been injured, and nearly two million have been displaced. The Disasters Emergency Committee that brings together key charities including the Red Cross, Save the Children and Oxfam announced today that it has received more than £30m in donations.

By the end of the night, the people of this country will have given something like £60m to help complete strangers.

By that token, you could say that coverage of stories such as the typhoon is not only in the public interest, but that it is also clearly of interest to the public.

OK, many of us choose the 'worthy' moments in the Children in Need telethon to go and fetch another drink but, to be honest,  it feels uncomfortable to be lectured about children going without while you're tucking into your pizza. And anyway, celebs coming over all mawkish and sincere is pretty puke-inducing.

But we care enough to send the kids to school in fancy dress and with an extra quid in their pockets; to undertake lunatic stunts to raise £40 or £50; to wander round town with a bandage, nose and whiskers painted on our faces.

We care enough about the Philippines to be able to name the typhoon and the main town affected, to talk about it over coffee or in the pub, and most of all to put our hands in our pockets.

Think again about the £60m or so that will have been raised this week (not counting donation to other causes, such as the poppy appeal last weekend), and compare it with 'official' contributions to the Philippines aid operation. 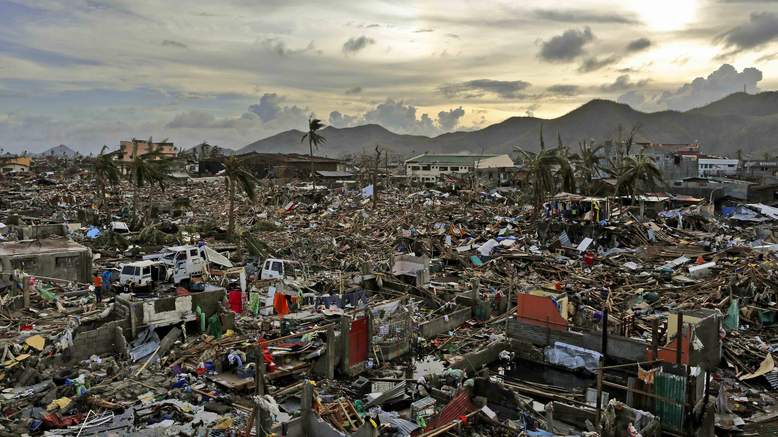 Individuals in Britain have given more to the Tacloban rescue effort than the EU, Australia and China combined
The UK has put together a £20m aid package and sent an aircraft carrier; the US has given £12m and sent 300 troops and an aircraft carrier; Japan has given £31m and sent 25 medics; the EU has given £7m, Australia £17m, China about £1m in goods and £100,000 in cash. (Saturday morning update: the Prime Minister has confirmed that the Government will give a further £30m, presumably honouring promise to match individual donations to the DEC.)

If individuals in this country have contributed more to the Philippines rescue effort than the EU, Australia and China combined, you may assume people are interested in what's going on there.

The Sun recognised as much and splashed on it twice this week. Yesterday it urged readers to 'give a quid to save a kid', not the most delicate slogan, but today it reported that the appeal had brought in £100,000. 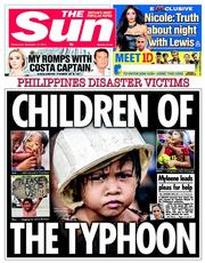 On Monday, the typhoon was squeezed on to the front in between a splash with a toe-curling pun headline about a helpline 'rip-off' and puffs for Miley Cyrus, 1D and the football. Tuesday brought even more frippery. But by Wednesday, the paper had sobered up and even curtailed the puffs for this front page.


The Times dropped the puff at the top that day to give Richard Lloyd Parry space to breathe, continuing on pages 6 and 7. But even with such commitment, it couldn't shake off that notion that papers have to feed their readers' stomachs as much or more than their intellects. 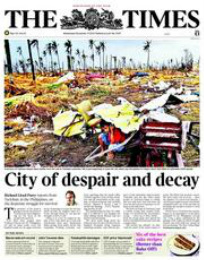 The solitary teaser in the bottom right-hand corner of the front was for cake-making. If The Times follows past form tomorrow, you can bet that the biggest word on the front page will be Eat! (Sorry, you'd have lost - Eat! was supplanted by a puff covering a third of the page promoting a 128-page Christmas food magazine.)

The Express had made the running on Saturday, splashing on 'The biggest storm in history'  when the typhoon didn't trouble any other front pages. But by the next day  it had reverted to type and was bashing immigrants. Then, as the week wore on, there was our killer winter to worry about. 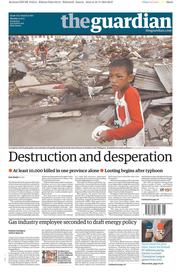 Come Monday, the Guardian was in its stride with a serious Philippines splash, followed by another on Tuesday and a basement and 6-7 spread on Wednesday. The typhoon dominated the Independent front on several days, but only pictorially; It never made the splash.

The Telegraph also used a huge picture on Tuesday, but apart from that the storm made the front only as a downpage double backed up by spreads back in the world news section. Well, by Wednesday the story was five days old, and we can't risk compassion fatigue, can we? Especially now the correspondents are reaching the disaster zones and actually have something to tell us about what's going on there.

And what about the Mail? The paper caught my attention with its 'My war on "what's in it for me" Britain' by Sarah Vine, aka Mrs Gove. (Yes, I'm a feminist and no, you shouldn't define a woman by her husband, but since she refers incessantly to the link, I think it's permissible.) 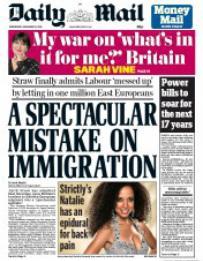 Well, let's get the column out of the way. The 'what's in it for me Britain' turned out to be the movement of a litter bin and a lesson in dog poo etiquette based on an incident when the Goves were courting. Given that their very legitimate elder daughter is ten, that is some while back.

The Mail has not yet seen fit to find a place for the typhoon on its front. Nor has there been a slot for the storm on the Mirror's front, which is a pity, given the solid sense written on its website by Fleet Street Fox yesterday.

The Express managed to combine the typhoon with a picture of Myleene Klass on Wednesday, and on the same day carried a leader praising the 'magnificent response from the British public' to the DEC appeal. But it still gave the story only a small slot on page 4. Well, there have been other important issues this week: A&E, Remembrance Day, energy prices. Oh yes, and the Prince of Wales hitting 65 (the whole of the Mail front today, for heaven's sake), Dimbleby's scorpion, golfer-eating crocodiles, winter snow horror ahead and evil foreigners invading Britain daily.
Editors seem to be at one in believing that we are much more concerned about these things than about people thousands of miles away in distress - unless they make a heart-rending picture when there is no pretty woman to hand.

Well, actually, we aren't.  We are not only interested in the plight of people we don't  know, we are willing to offer a helping hand. We also care about those in distress closer to home. But tomorrow's papers will run at best a bit of 1D and a wacky picture or two on Children in Need fundraisers coupled with an out-of-date appeal running total. To do anything more would be just so local paperish wouldn't it? And no one would want that, would they? Not when they could have a double-page spread on David Suchet completing the Poirot ouevre or the 50th anniversary of Doctor Who.

In their obsessions with the Great British Bake-Off, Downton Abbey and who's heading for the jungle,  our newspapers are underestimating their readers.

And that is always a dangerous thing to do. 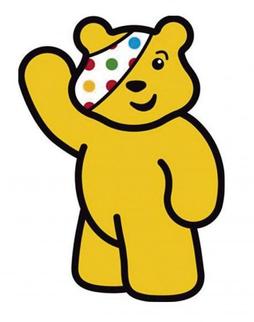