Struggle to bring colour to the blue-rinse bingo Budget

Scott in the Daily Star and Peter Brookes in the Times
By far the most important and unexpected elements of the Budget were those aimed at savers: a new ISA limit of £15,000,  the decision to let people to do what they wanted with their pension pots,  a higher-rate bond for pensioners, and a tweak to the taxation of savings interest. All of these were welcomed by the Mail, Express and Telegraph, but greeted with less enthusiasm by the Independent and Guardian, which both referred to a "generational jihad" with more concessions for the elderly while the young struggled. The Mirror was as appalled by it all as the Sun was delighted.

Pensioners, in common with all savers, have suffered over the past five years of ultra-low interest rates. But there is a feeling that they do not understand that younger working people  (sorry, we have to say hardworking now) have also suffered. They, too, have had to cope with rising prices while their wages are frozen and their jobs are at risk. They feel the baby boom generation have had their cake, eaten it, and left crumbs all over the floor for the next lot to clear up. What they may not fully appreciate is that people forced to invest their life savings in an annuity may never see another pay rise, however much the economy picks up. Who even begins to think about what an annuity is until they start hurtling to their forties?

The abolition of the annuity rule should be a boon. It's a great idea. Treat people as grown-ups, stop telling them how to spend their pocket money. The trouble is, these sorts of moves tend to have unintended consequences. Few will weep for the insurance companies with their hidden charges and administration fees, but we can expect a whole raft of new "financial products" aimed at filling the gap, which will create even more of a minefield for those about to retire. And, she says cynically, another round of misselling compensation claims a decade down the road. 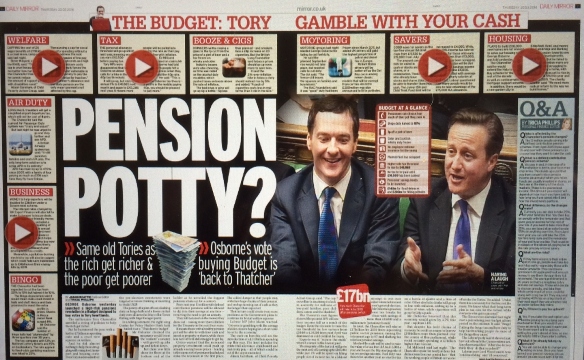 It's not hard to see where the better-off baby boomers might choose to invest their nest-eggs: in a nest. This might give their offspring a leg up the housing ladder, but it might also lift the first rung out of reach of many more young people as prices rise on a high tide of pension fund cash. The Chancellor - if he's still in office - will meanwhile be gathering in taxes from pensioners who can't wait to get hold of their money and take it in big chunks.

The final element of this savings revolution comes with the raising of the annual ISA limit to £15,000. The papers have been a bit naughty in presenting this as a threefold increase. It is nearly three times the existing cash limit of £5,760, but savers can invest as much again in stocks and shares. What is new is that the whole allowance may now be kept in cash accounts - and the interest or income on another £3,480 will be free of tax. But how many people, young or old, have £15,000 a year to squirrel away?

This may all be very worthy, but it is also a bit dry. So are the budget pages. Or rather they are generally as grey as the votes the Chancellor is trying to win. The puffs promise readers 'all they need to know about the Budget' and 12, 16 or 20-page supplements.

But these are hard to fill, especially if half a dozen news pages are also devoted to the nation's wallet. So they  rely heavily on instant judgments from staff, from outside experts and from "ordinary people from all walks of life". These tend to say exactly what you'd expect them to say; has there ever been a stand-out quote from any of them? Then there are all the tables to be accommodated and they're never going to look pretty.

This is where the imagination and the planning come into play. For a number of years the Times had a leitmotif running though its talking heads section, for example one year everyone quoted was called Brown, so each had a panel labelled "Brown on Brown". Hardly earth-shattering, but a nice little touch.

There was nothing remotely witty in any of the heavies' presentation today beyond the Lego-Playmobil type characters in the Guardian's 'how you are affected' panel.

Even the pictures were disappointing;  the Times and the Telegraph left their political cartoonists in their usual comment section homes rather than promoting them to the front of the supplement, as the Guardian and Independent did. This meant they were stuck with pictures of Osborne holding his red case on page 1 of both the main paper and the supplement. The FT had an illustration of the Chancellor on its front; the Independent some Russian soldiers.

Where was the quirky, the imaginative, the bit of fun? 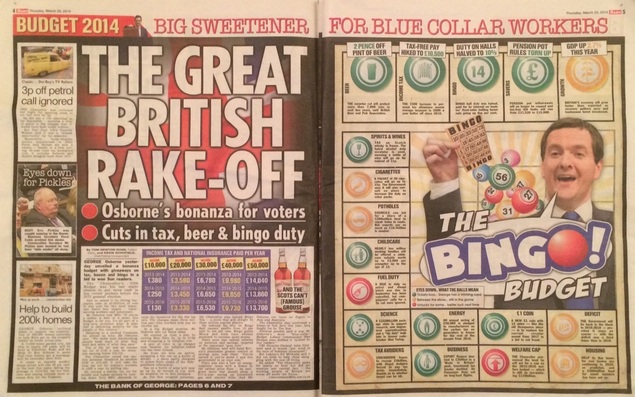 Osborne may well have been wondering the same thing when Bingo!  Along came his  honourable friend, the member for Harlow, to save the day.

While the tax on profits from most forms of gambling was 15%, for bingo halls it was 20%.  Robert Halfon had been campaigning for the duty to be cut, citing the decline in the number of clubs over the past few years - from about 600 in 2005 to fewer than 400 now. Halfon was not alone, more than 300,000 people signed a petition that was delivered to Osborne last month.  Their wish was not an expensive one to grant and - recognising the prospective appeal to the older voter  - Osborne went further, halving the duty to 10%.
Bingo  may have given cartoonists and the graphics departments something to play with, but it didn't resonate with the writers. The Times, for example, gave its betting story about 400 words, 350 of them focused on the impact of the gaming machine duty increase and the fall in William Hill and Ladbrokes share prices, with a blob par at the end about bingo. The Mail and the Telegraph also concentrated on what they called the "crack cocaine machines", giving barely a mention to the bingo.

When you consider that, according to the Gambling Commission, Britons spent £46bn on these machines last year and the bookies made £1.5bn profit from them, it's easy to see why the stories were balanced the way they were.

Enter Grant Shapps, the Conservative chairman. If Miliband was unwise to rely on Twitter for guidance on what might come up in the Budget, Shapps was downright foolish with his tweets after the event.

Even his own party was embarrassed by the patronising tone and the story swiftly found its way into print. And if you've been following the hashtag #torybingo, you'll know where it went from there.
comments powered by Disqus