Immigration and the Daily Express 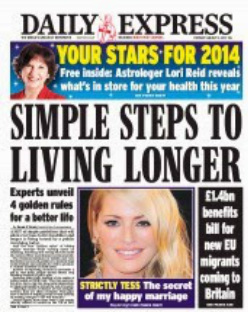 Forget about living longer, the horoscopes and the obligatory celebrity. I'm looking at the WOB headline on the right, which is a teaser to this spread: 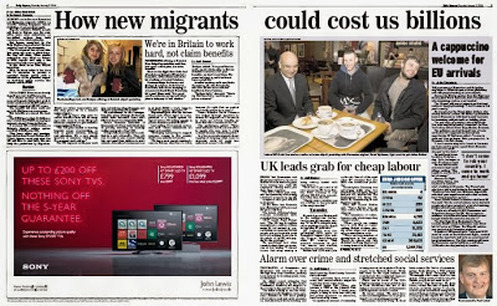 This really is one of the most disgraceful pieces of journalism I've seen in a long time. Apart from the token panel saying 'we want to work', the most honest word on the page is the 'could' in the main heading. The lead story begins:

"Almost one in five Romanian and Bulgarian immigrants will live on benefits, costing taxpayers almost £1.4bn, it emerged last night.

Experts estimate that 350,000 people will flock to Britain over the next seven years after restrictions on low-skilled workers from both countries were lifted yesterday.

But figures unearthed by the Daily Express have revealed the true potential cost of this stampede."

The 'experts' who estimate that 350,000 will turn up are unnamed, but it's fair to assume that the basis for this figure is the pressure group MigrationWatch. The organisation, which  is not known for its enthusiasm about allowing outsiders into the country, has predicted that 50,000 a year could move here. But even  it is
Presumably these experts were different ones from those whose crystal-ball gazing abilities are so trusted by the Express. There were 75,000 Poles living in Britain in 2003 and there are now indeed estimated to be 500,000. Many of those who arrived in this country after 2004 when the economy was buoyant - remember the scare stories about Polish plumbers? - returned home during the downturn after 2008.

"With the latest influx it has been left to observers to provide a panicked British public with a calculation of the potential impact on stretched public services like schools and the NHS."

There has, as yet, been no influx. Who caused the public to 'panic'? Who are these 'observers'? Who did these calculations 'unearthed by the Express'?

Oh, it looks as though it was the Express itself. And judging from the quotes within the spread, the observers and experts are none other than MigrationWatch and Ukip. Perfect.

The latest official immigration figures showed that there were around 120,000 Romanians and 47,000 Bulgarians. These are out of date as there has been some acceleration in recent months - but no reliable statistics have been published to back up the claim that 15% of Romanians are unemployed.

"If a similar number of the fresh wave of migrants fail to find work it would leave around 52,500 reliant on handouts capped at £26,000 a year. The benefits bill could add up to £1.39bn over seven years."

Time to show your workings, I think.
"It's also likely the predictions by MigrationWatch are rather conservative and this may prove to be a massive underestimate.

As well as those who come to collect benefits there will be many more who come to work. Every job taken by a migrant is a job denied to an unemployed Briton. The UK jobs market is heading towards severe overcrowding."

Now that's a particularly interesting observation. The second story on the spread is about jobs available in this country being advertised across Europe.

"Fears that Romanians and Bulgarians will have the run of Britain's labour market appear to be coming true - with UK employers offering more jobs than other countries."

The story is accompanied by a table showing that there are 300,000 posts open in Germany, fewer than 5,000  in Romania and only 4 in Bulgaria. Britain is advertising just under 1.4m.
Funnily enough, Polly Toynbee gives weight to this argument in this Guardian column. But who at the Express would read her?

Batten's party leader, Nigel Farage, also smells a rat. He accuses other countries of failing to stick to the principles of the single market in advertising so few jobs, then in the same breath criticises the UK for abiding by the rules.

"Instead of concentrating on ensuring British people can get back into work, we're advertising these jobs to the whole of the EU and paying for the privilege."

The two picture stories are about real people - people from Bulgaria and Romania who say they want to come to Britain to work. The final element is a piece about the prospective burden on Kent.

A study for the county council expects what seems a comparatively modest number of 8,600 people from the two countries to settle in Kent over the next decade. This would cost council taxpayers an estimated £3m a year - although the newcomers would presumably contribute to that - and, according to the council leader, put pressure on schools, housing, and add to crime levels. A Romanian student says

"Romanians don't come here for free money. If they come it will be for jobs British people don't want to do."

But the last word goes to Tina Saunders, 36, from Dover, who 'voiced the fears of many British-born residents'  when she said:

"Many of them are taking council homes from people like myself. We can't get on the list to get a house because they are being offered to foreigners first."

So the key quotes on the three policy stories on this spread come from the head of  MigrationWatch, the leader of Ukip and one of his spokesmen, a Conservative council leader and a random woman of whom we know nothing.

There is also a government comment in the £1.4bn story:

"These calculations are simply not credible. It's highly misleading to suggest everyone coming to this country claims or is entitled to benefits."

Yes, incredible and misleading. But even this token quote is about defending the Government's reputation against claims that it is a soft touch.

Whatever happened to objective journalism?