Deceived or deceptive, the paper must take the rap 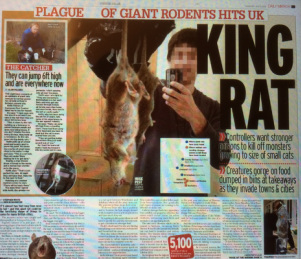 If we assume that the Mirror was responsible for the pixillation, the question then is why? If you're confident of your source and the story, why not show the unadulterated picture? Mr Whelan catches rats for a living. Where is the embarrassment to him?

And another thing...if this rat was caught on an industrial estate, why is it being photographed in a domestic environment? That is definitely not an "industrial" door in the background; why would Mr Whelan take his bounty - something he apparently sees quite regularly during the course of his working day - into his own, or anyone else's home?

Does all this sound super-pernickety? Maybe, but tabloid journalists, picture editors and editors included, are not easily duped. Dare I say it, someone should have smelt a rat.
This is Lauren Rosenbaum's photograph of her daughter Anne, which she posted on Flickr in November 2009. The tears flowed after a worm that Anne had befriended and named Flower wriggled off, apparently unimpressed by Rosenbaum's worm-sitting skills, while Anne had a nap. Rosenbaum submitted the picture to Getty's stock photos collection.

Yesterday it was the central image on the Mirror's  "hungry Britain" front page. The picture had been obtained legitimately, but was this a legitimate use for it? Some Rosenbaum followers commented on her Flickr page and she responded:

"I am making the (perhaps faulty) assumption that they licensed it through Getty. Sales don't show up for months so I won't know for a while, unless it was purchased in March, which I doubt. I didn't know they were going to use it.

We are okay having our children's pictures in the stock library. Generally if it's a touchy subject they will contact you and get an extra waiver; that wasn't done in this instance."

The blogger Dan Barker started a debate asking four key questions:
SubScribe had also been given pause for thought by the photograph. It was not marked as "posed by a model", but this could surely not be a real British child using a food bank?

People who questioned the "fakery" on Barker's website were themselves questioned for sidestepping the point of the story - that so many people in a developed country were going hungry. The Guardian blogger Roy Greenslade took up the story and questioned the Mirror editor, Lloyd Embley, who also met attack with attack:

"And there was me thinking a million food parcels was the story...It's a picture of a crying child made available to Getty for them to use and distribute through their library, which we used for illustrative purposes. Imagine the stink if we'd used a pic of an actual child who had received food parcels."

Exactly. There was no way the paper could use a child who had received a food parcel, crying or otherwise. Even if such a photograph were taken with the parents' consent, it would have been stigmatising and wrong. To pixillate it would not have produced the page the Mirror was seeking, so a genuine food bank customer was a non-starter.

From that we assume that the picture must have been a stock shot. But wouldn't it also have been wrong for any photographer to have upset a child model to the degree necessary to produce these tears? And there was no "posed by model" disclaimer in the Mirror.

Moving on from there, is it right for the paper to pick up a family photograph and use it in this way? Probably not, but if  the parent has made the picture available for general use? Well, maybe. But, as  Rosenbaum suggests, a call to the originator to check that they were happy to see their child presented as the face of British poverty might have been in order. The paper might also have acknowledged that this was a library photograph somewhere on the inside pages.
The Eastern Daily Press has also blamed a news release - dated April 1 - from a "usually reliable source" for its failure to recognise an April fool's joke. This wasn't a case of someone not recognising a silly prank, it was an example of a wanton lack of news sense. Had the story been even half as good as sold, it should have been the splash and made the nationals.

No one saw fit to ask even the most basic question - and then when the paper is found out, it blames the local business that is one of its customers for cracking the joke.

The Mail has meanwhile said that an "editorial mistake" was to blame for the removing the Tottenham coach from a photograph of Emmanuel Adebayor saluting the Spurs manager Tim Sherwood. It has also had to pay Paul Weller £10,000 and apologise for using unpixillated pictures of his children.

What is going on in our newsrooms? Has everyone forgotten the basics?
comments powered by Disqus