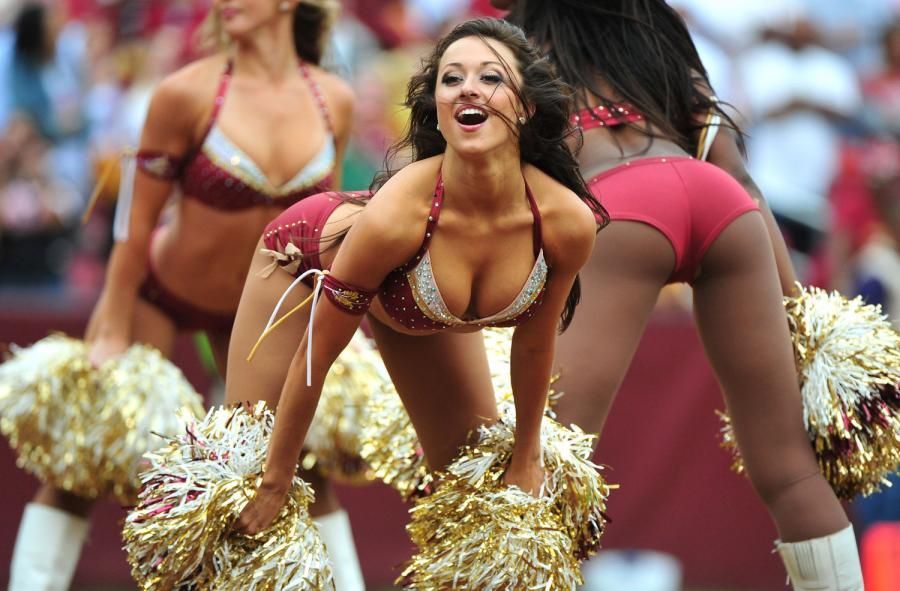 Monday 21 April, 2014
These women are cheerleaders, right?
Wrong. They are sideline dancers holding pom-poms.
SubScribe knows this thanks to an articulate young woman who was so affronted by media representation of her sport that she stood up in front of 200 of the country's leading doers and thinkers to put them right.
Thus Rachael Campbell, captain of the London City Stars team, spelt out the reality at the Names Not Numbers festival in Aldeburgh last month. The theme of the three-day gathering was "What matters" and Campbell persuaded her audience that cheerleading mattered because it was the only sport that involved complete equality of the sexes. Squads could be all-girl or co-ed, with men and women on the same team, doing the same stunts and having their skills rated on the same scoresheet.
It mattered because it was the fastest growing sport in the world, teaching young men and women to be athletic and strong and to treat each other as equals.

"You can't put your wellbeing in the hands of other people and not form bonds of incredible strength. If we miss a chatch there is a chance our flyer will not walk away. She lets us put her in the air with that firmly in mind and she lets us throw her anyway. That is what cheerleading is: it is trust and bravery. It is strength, in heart as well as body, and teamwork beyond compare."

Campbell is clearly passionate about her sport, and she has spoken about it on several occasions. This time she was inspired by the response to remarks by the sports minister Helen Grant in an interview with the Telegraph in February, in which she said:

"They aren't doing sport. They are waggling their arses near boys who are doing sport. The boys are motivated to compete harder and triumph in the subliminal (or not so subliminal) hope that they'll get first pick of these little minxes on the sidelines. Even if you don't think it's sexual - and I do; I think these girls might as well be bent over a rock, waiting to be mounted by whichever caveman gets back first with a rabbit in his hand - at best, their job is to support the action rather than take part in it."

The author of the article, published in the Guardian in October 2010, was Victoria Coren.
Today Coren - or Coren Mitchell as she is now - is herself the subject of Press coverage for her sporting prowess: the rather less athletic game of poker. Coren Mitchell has just become the first player to win the European Poker Tour championship twice. She first won in London in 2006 and repeated the feat yesterday lunchtime in Sanremo, Italy. On the first occasion she won £500,000, yesterday the pot was £391, 932. Her career winnings now stand at £1.5m. Vicky, as she is known on the circuit, is one sharp player. 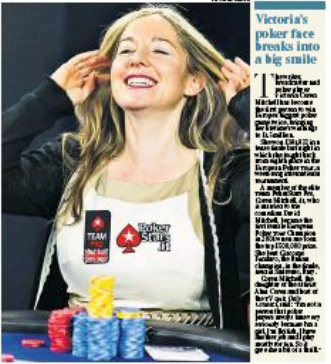 Every news report of her win, rightly, made the record the intro. They then said that she had been the first female winner in 2006 victory, which might seem reasonable, although the tournament had by then been running for only two years.
The reports, which were pretty uniform, also spoke of her television appearances and - high up - the fact that she was married to the comedian David Mitchell, who obliged with with a quote on her success. We also learn that she is the daughter of Alan Coren - but are spared details of her brother, Giles.
Only the Times, right, quotes Coren Mitchell herself, who comes out with the self-deprecating:
“I’m not a person that poker players always take very seriously because I’m a girl, I’m British, I have another job and I play mostly for fun. So it gave me a bit of a thrill.”

There is so much biography in all these stories that there is no room to explain her achievement. Poker is big business now and Coren Mitchell is a star of the game. We see her smiling with a pile of chips in front of her, but we aren't really told what she's done, how many people she's beaten, how the tournament works.
And so, as with the cheerleaders, we're left with our own, probably wrong, preconceptions about the game and the scale of her achievement. Ok, there's a lot of money at stake, but she's a pretty blonde woman who plays for fun. It can't be serious can it? Well obviously it can and is.

For a purely sporting look at what she was up to, have a read of this blog.
And to see what cheerleading really involves, have a look at the video below. Be warned, it's noisy, but it's also spellbinding.
Then maybe next time  we're asked to write about a sport or game or pastime, perhaps we'll remember that we may not know as much as we think we do - and do a bit of research before we start typing.

More from Names Not Numbers
Michael Wolff: Britain doesn't believe in a free Press
Frontline reporting: struggling to get the message across